As a Marketing and Communications Intern, I pitched the idea of a CAST Schools Shop. Now, as a Design Intern, I am creating their first Shop catering to every School at CAST. 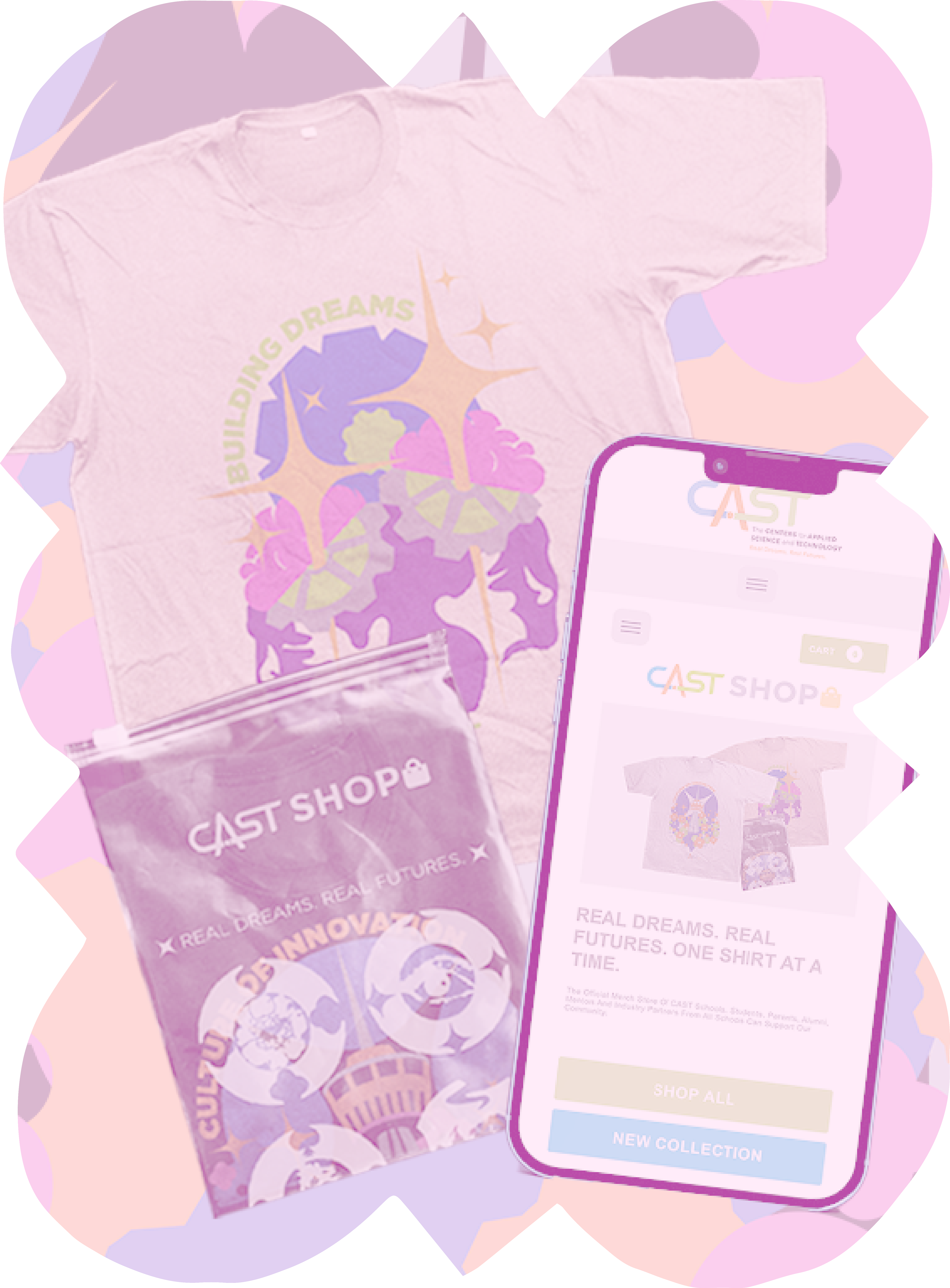 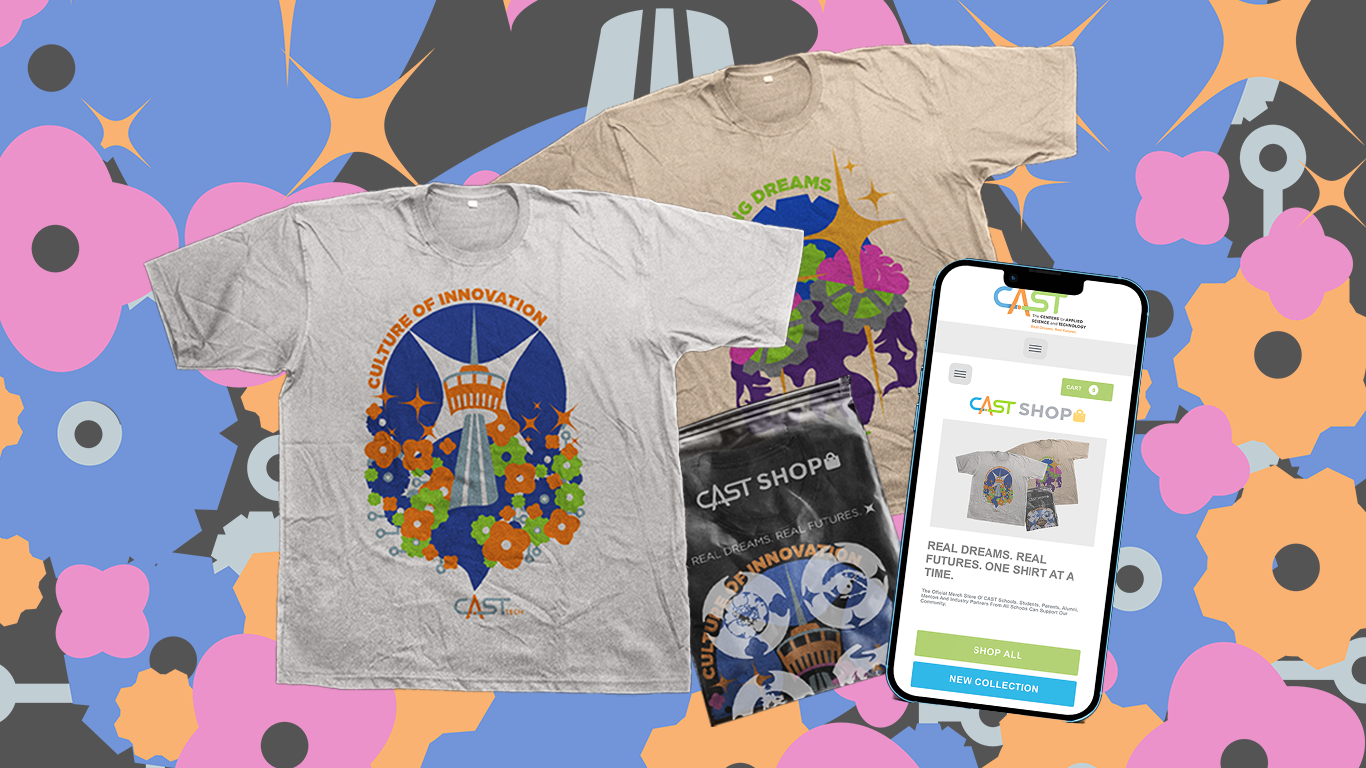 ‍
As a Marketing Intern in my Junior year of High School, I noticed one of the six CAST Schools released apparel; CAST Tech High School set up a shop, using FanCloth, for this year's school clothes.

I noticed that the apparel did not fit the CAST Brand's language and design. With words like "Tradition," (CAST uses words like Innovative and New and Different, nothing classic or "traditional" at all). I wrote a proposal to create a CAST Clothing Shop. However, these shirts would be designed to represent CAST.

Being that CAST is a mission-focused network of schools with the motto of "Real Dreams. Real Futures." I knew that CAST apparel needed to reflect the brand.

CAST has a vision of providing schooling that maximizes them for the jobs  of the future. First, however, I thought about how the mission ties with a shop.

I boiled down the CAST way by looking at everything the school has done to this:

To empower and connect young people today so that tomorrow, we may advance our community by achieving their dreams and futures.

The idea was approved, and I researched CAST Tech's current apparel run.

CAST Tech High School sold 317 items total.
99 people bought those items. 36 pieces were available to purchase, which ran for 1 month, with a total of $8,500 in revenue.

The most popular pieces were these 3 shirts. People bought basic school pride shirts the most.

And the least popular were the items above.

Nobody bought the item above.

During the 1-month marketing campaign by CAST Tech, 1,266 people clicked on the link shared with parents and students. However, only 99 people bought items in a school of 520 students, which meant only 19% of students bought anything.

With this data, I talked to parents and students to see how much they would pay for a shirt.

Our 2 customers are Parents and Students.

However, CAST Schools serve economically disadvantaged students, so that is something I kept in mind.

‍
Is independently the best option, or is FanCloth good?
We met with a supplier for logistics.

I broke down the numbers and compared the two options, an outside Supplier or FanCloth, for one shirt.

After talking to the schools and teachers from schools who used FanCloth, the Student Council set up the shop and used it for fundraising. This finding was important so that funds could be distributed to the schools. A bucket system made sense.

CAST was in an interesting position, being that it is not a school district. Instead, it is a non-profit, with 4 school districts operating the schools.

However, besides the Advanced Learning Academy, every school shared the CAST Schools logo inside the High Schools Logo.

Students also felt disappointed with the apparels design and thought they were not appealing. Also, they wanted higher-quality clothing.

‍
We would have a shirt for each school with its unique personality and color for the apparel design and shirts for CAST as a whole/ all schools.

The shirt's design will be abstract, fashionable, positive, and appealing to any student.

The brand is more Playful than Serious; it's more Innovative than Classic. It speaks more Authoritative than a Friend and is for everyone.

While designing for one of the schools, ALA or Advance Learning Academy, I felt the design did not match the brand's style, voice or personality. However, I wasn't sure why.

I looked at past designs, some successful and others that didn't work.

I noticed there's 1 defining trait for successful designs, and it was super simple.

Sin Fronteras or Without Borders.

I also know I need to cater to the school while also making the design flexible for any school. During this time, I finished developing my Personal Brand, Jon Rodz, which launched at SXSW.

The designs turned into a collaboration between my brand and CAST's, giving two benefits.

1st benefit is the use of the logo; Jon Rodz's version of the shirt can use the CAST Logo, while the High School shirt is school-specific.

2nd benefit is using the colors; Jon Rodz's version of the shirt can use the signature colors of Blue, Pink, and Orange, while the High School shirt is CAST-themed with Orange, Green, and Blue.

Here is how it looks with the two benefits.

‍
For the design of the site, I designed a site in Figma.

‍
I needed to make sure fundraising is an option, showcase the current collection, and tell the impact of the CAST Shop.
Initial Design:

However, doing the accounting to separate funds into separate buckets was too complicated and was not self-sustaining. So that section was scrapped. I also noticed there was no capacity for sort options which is crucial for Students looking for apparel specific to their schools.

‍
I looked at what exists for the first school I designed for CAST Stem.

Lots of green even to this day

The challenge was to reinvent the gear.

These are the words used to describe CAST Stem and are said by the brand.

This was the idea.

This was the idea.


The project is still in development.